The game works on iPod Touch- and iPhone models which support i OS 4.1!

This game is based on the popular command line game Super Star Trek from the 1970s. At that time computers did not have fancy graphical user interfaces but
only teletype terminals. Still engineers liked to play games and because games were not readily available they wrote their own ones. Star Trek has originally been written in
FORTRAN, then in BASIC (published in the book “BASIC computer games”, by David Ahl) and got ported onto various personal computer systems like the Apple II.
I myself have once ported it onto the Sharp MZ-80K. 1996 Chris Nystrom rewrote the game using the C language which made it possible to run Super Star Trek on even more computer systems. There are many versions of Star Trek around because virtually every programmer who touched it also changed the game. TREK QUEST is based on the ideas of both “Star Trek” and “Super Star Trek” written by David Matuszek, Paul Reynolds, Don Smith and Tom Almy. 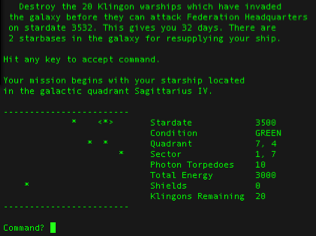 *** SIMULATION OF A MISSION OF THE STARSHIP ENTERPRISE,

*** MODIFICATIONS TO THE LATTER (PLUS DEBUGGING) BY BOB

*** MUCH AS POSSIBLE WHILE USING MULTIPLE STATMENTS PER LINE 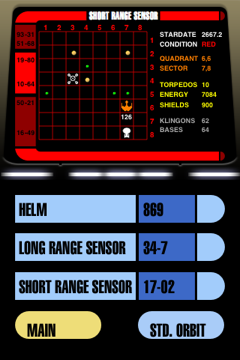 The Organian Peace Treaty has collapsed, and the Federation is at war
with the Krygon Empire. As commander of the Starship U.S.S. Protector, your job is to wipe out the Krygon invasion fleet and make the galaxy safe for democracy.

Your battleground is the entire galaxy, which for convenience is divided up into eight rows of eight quadrants each, like a checkerboard. Rows are numbered from top to bottom, and columns are numbered left to right, so quadrant 1,8 would be in the upper right hand corner of the galaxy.

During battle you will be concerned only with those enemies that occupy the same quadrant as yourself. Quadrants are divided up into sectors: eight rows of eight sectors each. Sectors are numbered in the same way as quadrants, so the sector in the upper right corner is sector 1,8. You have a short-range scanner which allows you to look at the entire quadrant in a single display.

Trek Quest is a rich game, full of detail. These instructions are written at a moderate level–no attempt has been made fully to describe everything about the game, but there is quite a bit more here than you need to get started. If you are new to the game, just get a rough idea of the kinds of commands available, and start playing. After a game or two you will have learned everything important, and the detailed command descriptions which follow will be a lot more meaningful to you.

You have weapons: phasers and photon torpedoes. You have a defense: deflector shields. You can look at things: long-range scanners, short-range scanners, and a star chart. You can move about, under warp drive or impulse power. You can also dock at a star base and rest while repairs are being made…

This game features three game levels and a trainee mode. The difference in the levels is the number of enemy ships, which goes up with the rank you select; the starting energy level of your ship and the time remaining, both of which decrease the higher the selected rank is. There is also a Trainee mode available it is helpful at the beginning to learn navigating and to use the various weapon systems. In Trainee mode every quadrant contains an enemy and a star base. Shields are at 2.000 units, the ship’s energy level is at 8.000 units and you have at least 80 stardates to get rid of all the Krygons.

Finding your way around

The controls are spread over three sections: Navigation-, Battle- and science station. The sections can be grouped into view only and control sections. The control section share common input elements which are described in the following paragraphs.

are used in shield and phaser control. They allow to enter values like on a calculator . Touching the blue title bar will reset the current value. 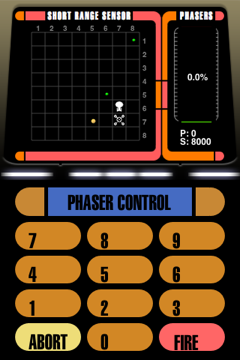 are used for navigation and torpedo control. The course is divided into eight main directions starting with 1 in the three o clock position and then counter clockwise
until 8 which is the five o clock position. The navigation control contains an additional touch sensitive slider on the left side and a toggle button for impulse and warp
which are used to set the warp factor. To travel within sectors it is advised to use only impulse engines. 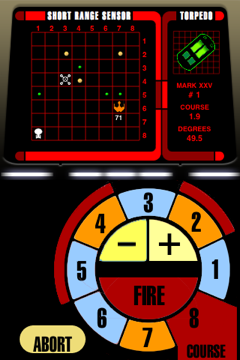 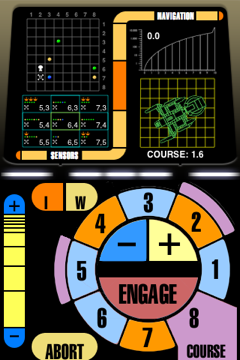 The course input display changes according to the input parameter. When setting the warp factor then the warp display is shown. When changing course then the course display replaces the warp factor display. Touching the screen area brings up a compound view which shows SRS, LRS, Warp and Course data in one screen. Touching once more brings back the dedicated screens. Note: Should there be enemy ships in an adjacent quadrant make sure you raise the shields before you command the ship to fly into that quadrant. Failing to do so most certainly results in a loss of your ship!

Another way of finding your way around is the galaxy report found in the Library Computer Section. It shows all quadrants of the galaxy. The ones which you have already explored show the objects inside the quadrants as dots. Green dots stand for stars, white dots stand for star bases and orange dots stand for enemy vessels. Quadrants which are unexplored don’t show anything. Quadrants with star bases are always shown as they have been explored before. The quadrant you are currently located in is indicated by a blue frame. 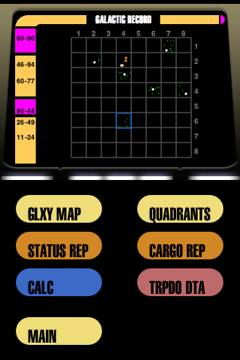 Your ship has shields which can be set to use a fraction of the ship’s energy. When the shield energy is lowered the remaining energy will be transferred back to the ships. When the shields get hit by a Krygon attack their energy level will decrease. Make sure you route enough energy to the shields before they are down to zero because the next hit will destroy your ship. Also the Phasers use energy which will be drawn from the ships energy. Note: The closer you are to an enemy ship the less Phaser energy is needed to destroy it. Photon torpedos are better suited for long range attacks . Note: Photon torpedos auto destruct when they travel across a quadrant border. Therefore it is not possible to shoot a torpedo from a safe quadrant into a quadrant with enemy ships. The Damage Reports are also located in the battle section. When your ship gets hit, equipment might be damaged. The damage reports screens shows the estimated time for repairs. As damaged equipment might not be used the related LCARS Buttons are deactivated which is indicated by red color. 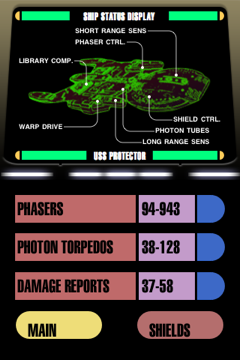 There are several ways to repair non functional equipment:

Various ship functions are located in the computer section. They are described in the following table.

There are three types of planets in the galaxy.

To be able to mine bring your ship into a standard orbit around a planet and then
you will be presented the current scan results. You may then decide whether to
send a mining party to the surface or not.

are the only places in the galaxy where your ship can be refueled and torpedos can be restocked. Additional personnel is also standing by to repair damaged equipment. To dock to a star base fly to a sector to the left, right below or above the star base. When docked you will occasionally be contacted by traders who might offer useful equipment for your later missions. However they know what precious items they possess and therefore the items don’t come cheap. So make sure you always bunker enough dilithium crystals before docking. 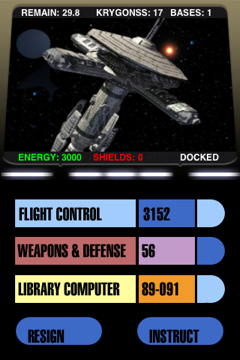 Many thanks got to Chris Brennan and Matt Lunsford for beta testing Trek Quest and coming up with great ideas for making Trek Quest what it is today! Another
great contributor is Andy Tudor who did beta testing and provided the game icons and splash screens.

The Images of starships and starbases are coming from Fotalia.com, the Artist is Innovari.

All the graphics of planets and nebulae are in the public domain because they were created by the European Space Agency and NASA. Hubble material is copyright-free and may be freely used as in the public domain without fee, on the condition that ESA and NASA is credited as the source of the material. The material was created for ESA by the Hubble European Space Agency Information Centre and for NASA by STScI under Contract NAS5-26555.

The LCARS screens are based upon the designs of Michael Okuda and his Okudagrams.

Star Trek, Starfleet, The United Federation of Planets, and ALL related marks are trademarks of CBS, Paramount Pictures and ViaCom Productions. All rights reserved.

iPhone and iPod touch are trademarks of Apple Inc. All rights reserved.